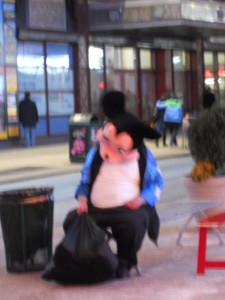 THIS episode was trials and tribulations—and a nightmare for Arthur to edit! First off, it’s episode 81, NOT 82. Then, Arthur had some roofers doing work (it was like déjà vu all over again…). He tried to edit out the noise, but sometimes he couldn’t and said it sounded like military drums (well, that’s what Arthur thought—maybe he’s paranoid?). Anyway, we got going and before we even hit ten minutes, Jason’s computer spat the dummy and we had to pause. Then, we had to stop again so Arthur could deal with the roofers when they were done. The phone rang. Arthur’s dogs even barked. Too much. Sigh.

Still, despite all that, we got through a lot! After special days, we moved on to an extended discussion of Jason’s (cheap!) trip to New York City. After another interruption, we move on to news and politics, starting with the Republican plot to change the Electoral College. We’re not impressed. It leads to a larger discussion of the contempt Republican Party leaders have for democracy—they put “party first”. The discussion was typically organic—but interrupted, so, yeah.