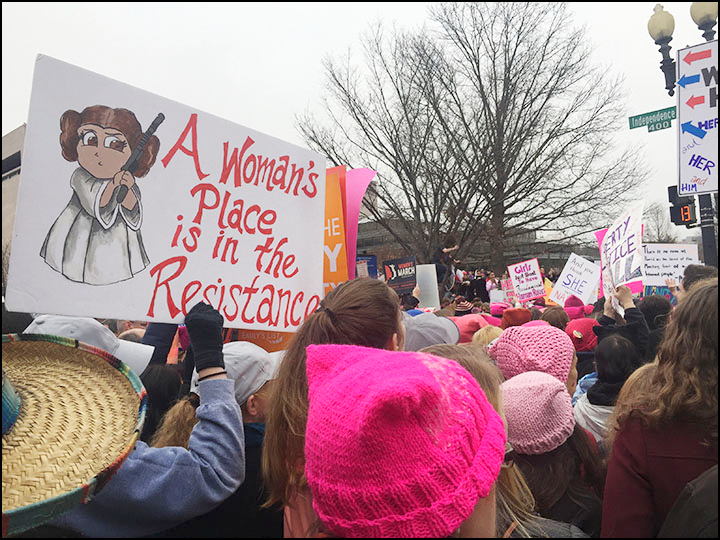 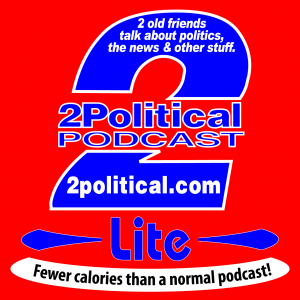 Welcome to the first 2Political Lite! These will be a series of shorter podcasts made by only one of us, and usually on one topic. It may be something we want to talk about in more depth, or even things that just aren’t suited to the regular 2Political Podcast.

In this first Lite episode, Jason tells us about his experience of the Women’s March in Washington, DC—what he saw and did, as well as a bit on its importance. This is the “colour commentary” we mentioned in episode 122.

The photo above is from Jason, who has posted many more to his blog (link below).

Two episodes in one month, posted around 24 hours after recording, and this episode is a reasonable length—where are the real Arthur and Jason?!

Just kidding—it really is us back so soon. We’re impressed by the level of protests. Is there something else going on, though? Today’s is a wide-ranging discussion eventually leading to talk about reforming the Electoral College and making it easier to vote, not harder. We even have comments! Jason closes out this episode with a non-political anecdote.

Watch out for the first 2Political Lite, coming soon to this podcast feed! (subscribers to the podcast will get them automatically)

Correction: Arthur misspoke: He took Chuck Schumer to task for promoting a “Top-Two Primary”, not for advocating awarding Electoral Votes by Congressional District. Coincidentally, however, the better solution to both would be the Alternative Vote.

Links for this episode:
“Trump’s Executive Orders Were Brought to You by Breitbart” – By Eric Levitz, New York Magazine
“US travel ban – Why these seven countries” – By Jack Goodman, BBC News (setting the record straight about what happened in the Obama years)
“GOP Maintains Edge in State Party Affiliation in 2016” – Gallup
”Trump Sets New Low Point for Inaugural Approval Rating” – Gallup
“Fixing the Electoral College” – Arthur’s blog post about reforming the Electoral College, National Popular Vote Interstate Compact, and more
Jason’s blog posts about the Women’s March
“Monday’s Dusting of Snow” – Jason’s blog post he mentioned at the end of the podcast, and also this one: “More of Monday’s Dusting of Snow”
Jason’s Blog
Arthur’s blog, podcasts and videos can be accessed here.

This is like the 2Political Podcasts episodes of old, one topic leads to another in a meandering path, much as we’ve done our entire lives. Lots of chatting about the things currently being talked about as the new regime nears its beginning. I decided against splitting this episode into two.

Links for this episode:
“We all make plans” – Arthur’s blog post about his healthcare adventure
“Getting the Retaining Wall Fixed” – Jason’s blog post on his retaining wall issue
”Meryl Streep strips the bark off Trump” – the Washington Post column by Jennifer Rubin that Jason mentioned
“States of delusion: The Rightwing’s latest nutty obsession” – Arthur’s blog post about the Rightwing wanting to discount large urban areas form election results
Jason’s Zoolights blog posts
“The Definitive Sign the Holidays are Over” – Jason’s blog post he mentioned at the very end of the podcast
Jason’s Blog
Arthur’s blog, podcasts and videos can be accessed here.

This is just a quick update to say we’re returning in January. We’re also going to do some short commentary from time to time, and those will be part of the normal podcast feed, so you won’t need to do anything to get them.

Thanks for your patience—catch up in the new year!

Back to political stuff this episode—though we start with just chatting.

When the political talk begins, we start with talk about how the Donald might win in November. Then we go on to talk about Bernie and his supporters. Arthur is increasingly annoyed with some of Bernie’s most ardent fans. We have a few other complaints. We have a go at Drumpf and the Republicans, too, of course. We even talk about illegal immigration, both the hypocrisy of those who claim to want to fight it, and what would happen if they actually did.

Links for this episode:
”Most “Pro-Life” Americans Unsure About Trump’s Abortion Views” – Gallup
”How Would Americans React to a President Trump’s First 100 Days?” – Gallup
”Who are Trump’s potential Supreme Court picks?” – MSNBC
”The smug style in American liberalism” – The Vox piece we mentioned
”An Historic Night at Nationals’ Park — Max Scherzer Strikes out 20” Jason’s blog post on the game we mentioned at the very end
Jason’s Blog
Arthur’s blog, podcasts and videos can be accessed here.

This is a different sort of episode for us—not unusual, but not common: This is one of those “& other stuff” episodes we mention on our website and album art. This meant that Arthur didn’t rush to edit it, then he got sick. Sigh. Anyway, we’ve already recorded another episode, and will be posted soon.

We begin by talking about technical, um, challenges. We have had a few! This led to a discussion of some American things not available in New Zealand. We also talked about baseball—well, Jason did. And, we talk about spotting famous people—and that leads on to famous people dying, some people’s reaction to those deaths and the reactions of people to those reactions. And then we end up NOT talking about comments. The trials and tribulations took their toll!

A newer (already recorded) episode will be posted soon (meaning, as soon as Arthur finishes editing it…).

Links for this episode:
Bryce Harper’s Instagram photo that we talked about
Arthur’s 2008 blog post on his brush with a famous person he talked about (second item)
“After Prince died” The blog post Arthur mentioned
Jason’s Blog
Arthur’s blog, podcasts and videos can be accessed here.

When we recorded Episode 118, we thought something was off about the numbering. Then Arthur posted it and found out we were right: Two episodes were missing! What to do?

So, Arthur climbed the rickety ladder leading up to the attic space above the 2Political Podcast Studios and started looking around. He saw an old steamer trunk off toward the back, which was kind of odd, since he had no idea where it had come from or who put it there. Even so, he went over and had a look.

Behind the truck were some things that had apparently slid off the top. Behind a “Goldwater–Miller” campaign poster, and next to a snowglobe of a rosebud, he found a Zip Disk that said, “Process” on the label.

Intrigued, Arthur returned to the 2Political Podcast Studios, but they were far too modern for a Zip Disk. Arthur scrounged around in his personal archives (that is, boxes packed away…) and found his old Zip Drive. He located a SCSI to USB converter, then managed to find software to make his Mac see the drive (provided by a guy named Boris Badenov who promised the monthly payments will stop in only 20 years, something, something, moose and squirrel…), and voila! The Lost Episodes were found.

We’ve already posted episode 118, of course, so here are the lost episodes 116 and 117. Depending on your browser and settings, if you click on a link below, it should open-and play-in a new window. Or, you can right-click to download them to listen to later. Or, not.

We were a bit confused about the episode number for this one, and when posting it, Arthur noticed why. He will investigate further.

This episode had some sound issues. Arthur had a slow Internet connection which affected our Skype connection.

We talk about the New York primary, Drumpf’s delegate and party problem, some trivia, how the media should have been doing a better job of explaining how primaries and delegate selection works, and we even talk about sports (yes, really…), and Jason watching Jeopardy! being recorded—this is a very eclectic episode.

Links for this episode:
The transcript of the April 6 Rachel Maddow Show where they talked about Rule 16c
Real Clear Politics list of delegates/dates
”A Couple of Funny Signs” – his post about signs Jason mentioned
”Harper Hits Home Run 100 — A Grand Slam!!!” – Jason’s blog post on the home run he mentioned
”Emanuel defends $1.2 billion Lucas Museum plan as ‘investment in the future’” Chicago Tribune
Jason’s Blog
Arthur’s blog, podcasts and videos can be accessed here.

Arthur finally found time to edit this episode! The Powerball lottery drawing in the USA hadn’t happened yet when we recorded, so we begin today talking about that first. Then we turn to the deaths of Natalie Cole and David Bowie. Arthur wonders: Should Bowie have told his fans he was terminally ill?

We also talk a bit about the whole “Is Ted Cruz really eligible to run for president?” thing. There actually are legitimate questions, but we talk mostly about the broader implications of those questions. That leads to more general talk about the primaries and polling.

Links for this episode:
”Ted Cruz is not eligible to be president” – Mary Brigid McManamon in The Washington Post
”Harvard law professor: Ted Cruz’s eligibility to be president is ‘murky and unsettled’” – The Guardian (via Raw Story)
”Yes, Ted Cruz is a ‘natural born citizen’” – Jonathan H. Adler in The Washington Post
”It is absolutely scandalous and ridiculous that American immigrants can’t become president” – Vox
”The Republican Party Has Only Itself to Blame for Donald Trump” – By Kevin Drum on Mother Jones
Jason’s Blog
Arthur’s blog, podcasts and videos can be accessed here.

We decided to do a special episode that wasn’t tied to the particular time it was recorded so that we’d have something to post during the holidays. We’d hoped to have it a little bit earlier, but, hey—it IS the holidays!

So today we talk about the state of public discourse, especially as shown by the comments people leave online. Jason has some actual examples of the sorts of things we’re talking about. Arthur shares some of his own experiences with the trolling behaviour of other commentators.