We decided to do a shorter episode this time, and I took Arthur only five days to get it edited. Progress.

We start out talking about the state of the election campaign. Among other things, we don’t understand why the newsmedia fails so miserably at understanding why Trump continues to do well. Maybe journalists and pundits don’t understand the base of the Republican Party, and that’s why they don’t understand his appeal to that base? The early contests—especially Iowa—make matters worse, since they’re all completely unrepresentative of the USA generally (and Iowa Republican politics is domoinated by fundamentalist Christian political activists).

As we start to wrap up, we talk a bit about Arthur’s summer off from work, which leads us to talk about going to the movies, since we were both about to see Star Wars: The Force Awakens at the time we recorded. What’s better—assigned seats or general seating? We have different views on that.

We start today talking about a couple of Jason’s pet peeves—the news media’s poor performance on reporting on terrorism. We talk about why that might be the case. Arthur talks about the people who are real threats, and how we have no idea why they do what they do. We also talk about how the media is used, and how so often they don’t really report anything at all useful. We still think that the whole Daesh mess is an Arab problem, and sending in troops is nuts.

Next, we talk about a letter Jason received telling him the guy who mugged him is up for parole. Jason shares his reaction.

Arthur says his dogs apologise for barking while we recorded this episode. They said they had no idea they needed to be quiet.

Links for this episode:
“Kiwi Jihadi brides on the rise” – from Stuff
“‘The worse the attack the more excited they are’ – Kiwi women leave to be jihadi brides” [Video] – ONE News – Has the comments by John Key that Arthur mentioned
“An Unwelcome Blast from the Past” – Jason’s post on his letter about his mugger’s parole
Jason’s Blog
Arthur’s blog, podcasts and videos can be accessed here.

This episode was delayed, again because Arthur didn’t have time to edit it. We start today by talking about Jason’s to New York to see the final performance of Mamma Mia. After that, we talk about people liking what they like, one of Arthur’s recurring themes. That leads us to talk about meanspiritedness on the Internet—why do people say such horrible things about other people?

We talk a bit about “pharma bro” and his fake capitalism—or, his anti-capitalism, to be more accurate. Scott Walker dropped out. Good riddance! Other Republicans come in for their share of criticism, too, of course.

Links for this episode:
“Mamma Mia There I Go Again One Last Time on Broadway” – Jason’s Post that we talked about
“Like what you like” – Arthur’s posts that Jason mentioned
“Scott Walker could have stayed in the presidential race. But he wasn’t willing to fight” – from Vox
“Carly Fiorina Lies to Fox, Has a Bri-Wi Problem” – Huffington Post
Jason’s Blog
Arthur’s blog, podcasts and videos can be accessed here. 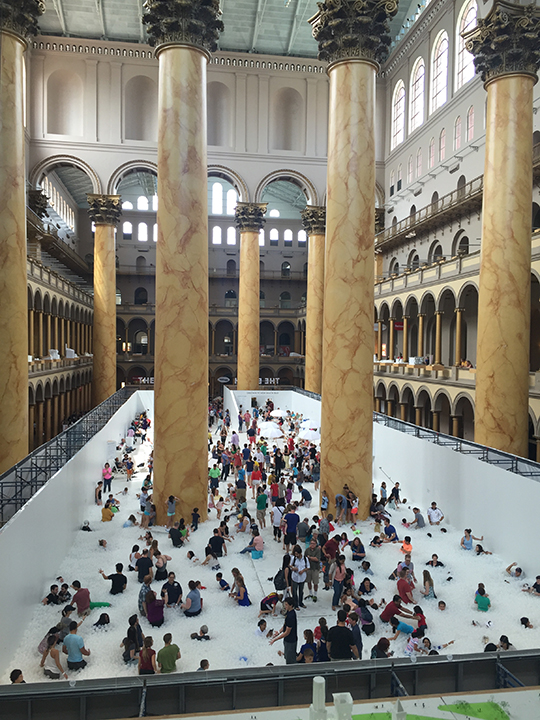 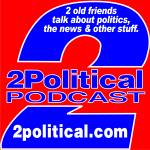 We start today by talking about some fun things, like Jason’s recent visit to the National Building Museum (which Arthur didn’t know existed) and their “The Beach” exhibit.

Our first topic today is “The Hair Donald”. Arthur thinks that pundits still don’t get how much Trump speaks to the base of the Republican Party. Jason points out how much of the conventional wisdom about the race is wrong. The Republican Party created all its own problems—and it has a lot of problems.

And, we managed to make this episode shorter!

Links for this episode:
National Building Museum
At the Beach at the National Building Museum – All Jason’s posts on the exhibit
“Charles Koch scolds the 1 percent: The plutocrat’s surprising moment of clarity” – from Salon
“The missing clown” Arthur’s blog post on the 17th Republican Clown Candidate
Jason’s Blog
Arthur’s blog, podcasts and videos can be accessed here.

This a NEW episode, recorded just a few days ago! Well, it had to happen sooner or later. Unfortunately, there’s a weird background noise at some points. I guess maybe we can have new, or we can have perfect…

We start out talking about the Republican Clown Bus, especially Trump. The news media’s obsession with Trump has meant that other stories are being missed. Also, other candidates can’t get any attention whatsoever. We even talk a bit about the Democrats. But, we also talk about some of the challenges that Republicans face, especially the party’s attitude toward immigration reform. It leads us to talking about making poor people peeing in a cup.

We thought we were done, but no! One more topic: The death of A&P. And also about Frango mints. It’s all about numbers on a balance sheet, the rest be damned. Arthur thinks there HAS to be a better way to raise finance for corporations.

One last thing! A site about all the candidates running for president.

Links for this episode:
“The last big clown” – Arthur’s post when John Kasich entered the Clown Bus.
“Early presidential poll favorites sometimes struggle at finish line” – from the blog of the National Constitution Center
California Proposition 187 – The Wikipedia article on the proposition Jason mentioned
“A&P was ‘the Wal-Mart of its day.’ Now it’s filing for bankruptcy.” from Wonkblog at the Washington Post
“Here’s who’s running for president in 2016” – a guide to all the candidates from Vox
Jason’s Blog
Arthur’s blog, podcasts and videos can be accessed here.

Next up, we start talking about Supreme Court rulings (the first one is not the one you might expect, and not totally serious. The Leap Second is next, before we’re back to serious talk (this is how we’ve always talked). Our main discussion is about the Supreme Court decision on marriage equality and the irrational reaction of the radical right. Toward the end we talk about the Arizona case, and why it could in the long term lead to one of the USA’s most critically needed forms of electoral reform.

Links for this episode:
“Hold on a second…” – Arthur’s post on his attempt to see the Leap Second (complete with a video he made right after this episode was recorded)
“New York City Trip June 2015” – a link to all Jason’s posts on his trip to NYC in June
Jason’s Blog
Arthur’s blog, podcasts and videos can be accessed here.

The episode was recorded back in May, but things happened. We talk a bit about that in the next episode. We have an unofficial policy of no more “Lost Episodes”, so here it is, even though it’s old.

We begin with Jason’s commuting story, and that leads to a wider discussion about customer service in general, as well as Metro in particular.

We then go on to talk politics, starting with the Republican Clowns who were getting ready to announce their candidacy. We then talk about the problems with how many candidates the Republicans have. It turns out that some of the discussion was prescient. We say, elections have consequences. Arthur has a go at ardent Leftists, not for the first time. We even get into how New Zealand does elections.

Links for this episode:
“Dictating the future” – Arthur’s post on his attempts to use his computer without hurting his finger
“Another Wonderful Morning Commute on Metro” – Jason’s post on his commuting hell
Jason’s Blog
Arthur’s blog, podcasts and videos can be accessed here. 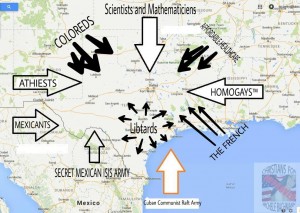 We begin with Jason’s car stories—well, they’re not really about that, are they? Actually, that leads to a wider discussion of when government works.

Jade Helm 15 is up next. Even among conspiracy theories, this one is nuts! “When a sentence begins, ‘even Rick Perry…’”. Eventually, we get on to the Republican Clown Bus.

Links for this episode:
“Getting rid of crackpotism in the GOP” By Jennifer Rubin May 11
“Ben Carson: I would not go to war with Russia over Ukraine” By Jose A. DelReal May 10
Three more clowns in the car – Arthur’s blog post in which he talks about Ben, among others
Allen West confronted with imaginary ‘Sharia law’
My Trip to Get My Car Inspected – Jason’s blog post after this episode was recorded
Jason’s Blog
Arthur’s blog, podcasts and videos can be accessed here.

The episode was recorded a couple weeks ago, but Arthur was too busy to get it edited. The “week off” we refer to was actually last week; we’re recording a new episode later this week.

Siri made a special guest appearance before we go to our first topic, the most important story in the world: The ponytail-pulling Prime Minister of New Zealand. Arthur summarises the story, then explains the background of the story and some aspects that weren’t reported outside of New Zealand. Naturally, the story is bigger than the creepy headlines: There are power disparities, and lack of consent, for example. But the politics of the story was icky, too.

Next up, the far-right anti-LGBT religious extremists rallied in Washington. We talk a bit about that, then that leads to a wider discussion of the far right, as well as how the US Supreme Court might rule. We even end on a positive note.

Links for this episode:
John Oliver’s take on John Key’s ponytail pulling
A Kindle edition of the book Dirty Politics that Arthur mentioned (and recommends) is available on Amazon
A related link: “The Curious Science of Counting a Crowd” in Popular Mechanics back in 2011
“The new argument against gay equality: Same-sex marriage kills” by Dana Millbank in the Washington Post, which Jason mentioned
“Janet Porter: Gay Marriage To Blame For Noah’s Flood, Will Usher In End Times”
“Bachmann: Rapture Imminent Thanks To Gay Marriage & Obama”
Jason’s Blog
Arthur’s blog, podcasts and videos can be accessed here. 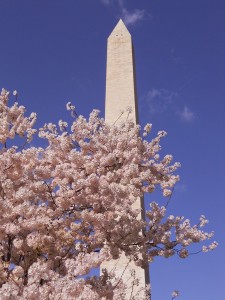 We start with light-hearted stuff, like Jason hates fitted sheets. Jason shocks Arthur when he talks about still paying bills by cheque—well, he’d use a check, probably. Jason is going to the closing date of Mama Mia, a show he’s talked about before. We also talk a bit out the Cherry Blossom Festival in DC—and all the other things going on at the same time. He also went to Opening Day for the Washington Nationals. Arthur, on the other hand, had a less fun time.

When we turn to politics, we start with the recent announcements for candidates for president by Rubio and Clinton. We also talk about the problem Republicans face in their campaigns, especially whoever their eventual nominee is. Money is a problem for Republicans, too, because of what it does to their nomination process.

Links for this episode:
As it turns out, Arthur blogged about folding fitted sheets
All Jason’s blog posts tagged “Cherry Blossoms”
Jason’s Blog
Arthur’s blog, podcasts and videos can be accessed here.